Gigabyte’s Aero is a model the company has long touted as a creator-specific line. I’ve always been a bit skeptical there. Gigabyte is known far and wide as a gaming company, and Aero models, despite their branding, tend not to look too different from the company’s Aorus gaming lineup. Outside of Dell’s XPS line, Windows-based “creator laptops” are typically known to be gaming laptops in slightly smaller and less RGB-laden chassis.

This particular, Aero makes some sense as a device best purchased by workers who have some heavier tasks in their workload or who may want to game here and there. Sure, it has a fancy OLED screen that reaches 400 nits of brightness and covers 100 percent of the sRGB gamut, 98 percent of Adobe RGB, and 98 percent of P3. The understated aluminum chassis is office-appropriate. But it also has Intel’s flagship processor, which is quite capable when it comes to creative work, and Nvidia’s top mobile GPU. That’s a setup best utilized by folks who want the best CPU they can get but who may not need the GPU quite as often.

Now, here’s the rub: the model I was sent is $4,399. This device is almost $2,000 more expensive than the most expensive model of the ROG Zephyrus G15, my current best gaming laptop recommendation. It is even a bit more expensive than a comparable 16-inch MacBook Pro, a common choice for creative professionals.

So, spoiler alert: creators who buy the MacBook Pro will find it better than the Aero in many ways (battery life and fan noise, in particular). But in addition to its powerful Alder Lake processor, which is certainly competitive with the M1 chips in terms of raw CPU performance, there’s one major area where the Aero is way ahead: gaming. If you’re looking for a device that can pull off close to the productivity the MacBook offers while also serving as a gaming option, the Aero is a place you could turn your attention. 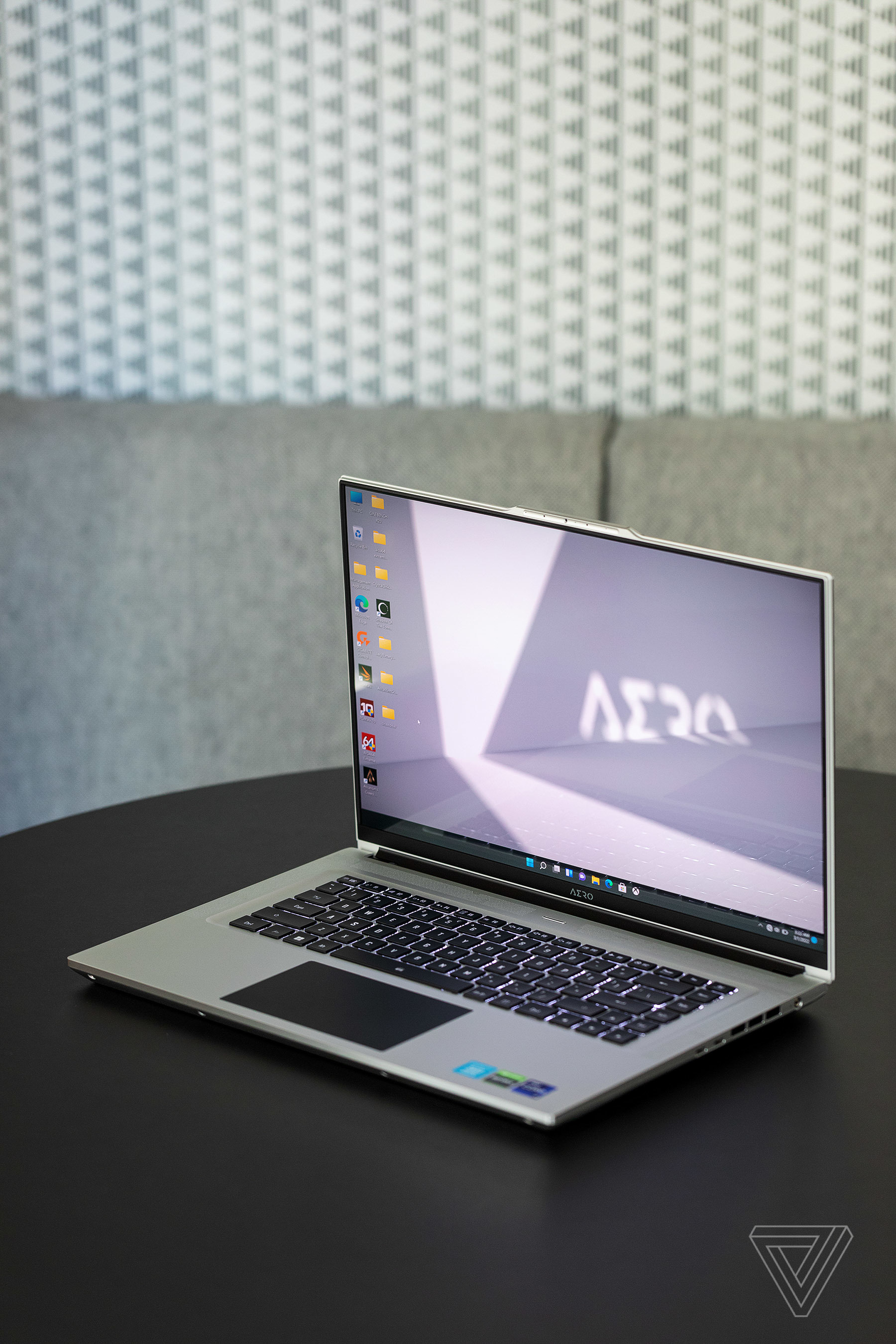 Chassis-wise, the Aero is 5.07 pounds and 0.88 inches thick. It’s decently well-built, with little flex to be found and a nice silver finish that doesn’t smudge or scratch easily. While it’s not nearly as thin as build-quality titans like the Razer Blade 17 or the MacBook Pro, it does feel more portable than the average bulky 16-incher you’ll find in the gaming sphere.

The lid has a bit of a lip where the front-facing camera lives, which is an area where Gigabyte has gone in a different direction from notch-loving companies like Apple. While this lip may look odd in photos, it quickly faded into the background during my Aero testing and did not impact my life in any way.

So how well does this game, exactly? At native 3840 x 2400 resolution, not amazingly. Shadow of the Tomb Raider averaged 26, 34, and 38 frames per second with ray tracing on ultra, medium, and off, respectively. Cyberpunk 2077 basically wouldn’t run with ray tracing on ultra, stumbling along at an average of seven frames per second; turning on DLSS brought this up to 32 frames per second, and turning ray tracing off (but not using DLSS) brought it to 29. For some reason, Red Dead Redemption 2 wouldn’t even give me the option to run it in 4K. Not sure what was going on there, but Red Dead can be finicky sometimes.

These results are fine and, unsurprisingly, miles better than what we’ve seen from Apple’s M1 Pro machines. They are not, though, head and shoulders above what we’d expect to see from a well-cooled, well-powered RTX 3070, which underscores the fact that what you’re really paying for with the Aero 16 is the CPU power (and the OLED display). For example, last year’s Aorus 15G with an RTX 3070 and a Core i7, which was thousands of dollars cheaper than this Aero, was only around 5 to 15 frames per second slower across titles.

The other thing I should point out is that this device is loud. I had the Turbo fan profile on (which is what you’d want for the maximum possible performance). The fans were so noisy that I had trouble hearing a video on another computer directly next to me, even with the volume all the way up. The cooling does appear to be doing its job: the CPU hit the low 90s every so often but generally avoided throttling temperatures. However, the keyboard and palmrest were also often warm (even outside of benchmark testing), staying just shy of being uncomfortably hot.

The device was much quieter during my general use testing, when I mostly used the Normal and Eco cooling profiles. (It was still often audible, though.) In these cases, Aero could easily run my regular heavy Chrome load and power an external display with battery saver on. It also did much better in Premiere Pro testing than we generally see from gaming laptops. This is expected since the Aero uses Nvidia’s Studio drivers (focused on creative use cases) rather than the GeForce drivers found in gaming rigs. It completed our Premiere Pro 4K export test in two minutes and 15 seconds, which beats the M1 Pro MacBook models (but not the M1 Max models, which are slightly more expensive). The Aorus took over seven minutes to finish that task. The Aero also got a solid score of 941 on the Puget Systems benchmark for Premiere Pro, which also beats many of the gaming systems in our database and isn’t too far off from the M1 Pro.

This all comes with a pretty big caveat, though: battery life. We haven’t historically expected Windows workstations to last all day, but I’d had faint hopes that Intel’s switch to big-little architecture with Alder Lake would usher in an efficiency revolution. Alas, the Aero 16 only lasted about two and a half hours on a charge with battery saver on, the screen at medium brightness, and the GPU disabled. That should be a major consideration for anyone who plans to use this on the go.

One other thing to note: while this device may look like it has a bunch of USB-A ports on the sides, those are actually vents. The actual port selection is limited to two Thunderbolt 4, one USB-C 3.2, one DC-in, and one audio jack. Those with USB-A and SD needs will be in dongle-land, which is a bummer. You also may want to plug in an external camera, as this webcam is mediocre and noisy (though it does support Windows Hello biometric logins).

The Aero 16 is an effective combination of a color-accurate OLED screen, impressive CPU power, and portability. That combination doesn’t come cheap, though, and the price combined with the battery life may make it a difficult purchase to justify for many people. Those who like what the Aero offers but are hoping to spend less might consider Razer’s Blade 17, which is available with this same GPU and a 4K screen for $100 cheaper, or a QHD screen for several hundred dollars cheaper. Those who like the Aero’s look but want better gaming chops may want to look at Gigabyte’s various Aorus laptops, which are gaming-focused and can get you a 3080 for much cheaper.

The primary argument for the Aero is that its CPU can deliver MacBook-competitive performance in creative applications while being much stronger than those MacBooks on the gaming front. Of course, an M1 Pro MacBook has various other advantages over the Aero: namely, it can last over six times as long on battery. But if you want a laptop to create, occasionally game, and stay at your desk, the Aero has a legitimate case.

Sat Apr 30 , 2022
The Asus ROG Zephyrus G14 for 2022 was the first system announced that would adhere to the 2022 version of AMD’s Advantage design framework, as the original G14 model did when it launched in 2020. That means it uses AMD’s latest technologies. This year, much of AMD’s chip updates aim […]