The ARRIS W6B Surfboard Thruster Wi-Fi 6E Gaming Acceleration Kit is a niche product — it’s not for everyone.

Specifically, it’s only for those too lazy to run a network cable. And by that, I don’t even mean the complete job of getting your home wired but just a relatively long ready-made CAT5E or CAT6 cable.

That said, if you’re looking for a quick way to get one wired device — a desktop, a game console, a switch, or any Ethernet-ready hardware — connected wirelessly at potentially Gig+ sustained half-duplex rates, the ARRIS W6B Surfboard will come in handy. I can even be generous and say it’s a good choice.

Gig+, or Gig plus, conveys a speed grade faster than 1Gbps but slower than 2Gbps. So, it’s 1.5Gbps, give or take, and it’s not fast enough to be qualified as Multi-Gig.

Gig+ generally applies to the sustained speeds of Wi-Fi 6 or 6E (via a 2×2 connection) or Internet speed, not wired local connections.

But considering the current street price of over $300, I’d remind you that it’s a super-expensive alternative to a network cable or a simple Wi-Fi 6E add-on card.

So, whether or not this Kit is worth the investment depends on how difficult it is for you to accept that little wire that snakes around your home and how much your pad allows you to take advantage of the fast and short-ranged Wi-Fi 6E.

The bottom line: The ARRIS W6B is a big if.

The ARRIS SURFboard W6B reminds me of the W6U. The hardware looks the same, but instead of one unit, you have two, and instead of white, you have them in black.

In reality, the W6B is totally different from the W6U. The latter is a wireless access point — it hosts multiple wireless clients and is an excellent way to upgrade an existing router to Wi-Fi 6E. On the other hand, our W6B is designed to replace a single wired connection.

The Kit includes two identical-looking units that have entirely different roles. One is the Main Access Point, and the other is the Satellite. As the names suggest, you connect the former to your network (a router or a switch) and the latter to the end device you want to be part of that network.

A relatively rare use case

Usually, when you want to connect an Ethernet-ready device to a network, like a desktop computer or a server, you hook a network cable to the device’s network port and the other end of that cable to your router (or switch).

The longer the distance between the two, the longer the cable needs to be. And if for some reason, that long cable is not an option and you can’t upgrade your device to a Wi-Fi client via an add-on card, such as the Intel AX210 chip or the Netgear A8000 USB adapter, the ARRIS SURFboard W6B comes into play.

Specifically, instead of that one long cable, you use two shorter ones. First, use one to connect the Main Access Point unit to the router, then use the other to hook the Satellite unit to the device. Plug both into power and mission accomplished.

In a nutshell, the ARRIS W6B is a Wi-Fi 6E-to-wired adapter. It allows a wired client to connect to a network via the new 6GHz Wi-Fi band.

And what I described above is also how you set up the W6B. The two hardware units are pre-synced out of the box — all you have to do is plug them in.

Each unit comes with a 2.5Gbps Multi-Gig port on its back, and on the inside, they support 4×4 Wi-Fi 6E to supposedly deliver the backhaul speed of up to 4800Mbps. “Supposedly” because we will never know since the 2.5Gbps port is the bottleneck.

Unlike the W6U, which has a simple web interface, the W6B has no user interface at all.

You can use the SURFboard Central mobile app, but in this case, all you can do is register the hardware with your account, view its status, and update the firmware.

There’s no way to customize the Main Access Point unit’s Wi-Fi network. Consequently, you can’t connect any extra 6GHz clients to it — it’s the only access point I’ve known that can host just one client, the Satellite unit.

Considering the mobile app requires a login account with ARRIS, it’s best to skip it — there’s no value in using it in return for the potential privacy risk.

In short, the SURFboard W6B kit works literally as an alternative to a single network cable. As is, the two hardware units are pre-programmed to work with each other; if you lose one, the other becomes useless.

As mentioned above, it’s super easy to set up the ARRIS W6B — it’s about as complicated as hooking two network cables.

However, making sure you get the best performance can be pretty tricky. That’s because the Kit only supports Wi-Fi 6E, which operates on the 6GHz band. This band has proven my experience to be shorter than 5GHz and 2.4GHz.

That said, ideally, you should place the Main Access Point and the Satellite no farther than 50 feet (15 m) away within a line of sight. If that’s not possible, the performance degrades a great deal. And that was also the case in my week-long trial, just like the 6GHz band of all other Wi-Fi 6E broadcasters.

And that brings us to the “lazy” notion I mentioned at the beginning. If you can place the two units within a line of sight or a short distance, chances are you can replace them with a network cable and save yourself a great deal of cash.

ARRIS W6B SURFboard Thruster’s performance: Fast but could be faster

The ARRIS W6B SURFboard worked as expected in my testing, considering the hardware configuration. Since the Kit doesn’t support any Wi-Fi client, I tested it with a Multi-Gig-ready computer connected to the Satellite unit’s 2.5Gbps port.

That said, while the two might have connected at top Wi-Fi 6E speed (4.8Gbps), 2.5Gbps is the ceiling speed. On top of that, it’s tough to find out which hardware was the bottleneck, one of the units, their ports, or the port on the test computer.

Still, the performances you see on the charts above are those you’ll get if you have a 2.5Gbps (or faster) Multi-Gig network and a similar client. Otherwise, 1Gbps is the fastest you can expect from this set.

The ARRIS W6B passed my 3-day stress test with no disconnection. So it proved to be reliable. However, it was noticeable in my electoral test that its performance can fluctuate a great deal — between 320Mbps and 800Mbps when there were a couple of thin walls between the two units. But that’s quite normal for the 6GHz band.

No 5Gbps or faster port; performance could be better

Even when its cost is justified somehow, you’re better off upgrading your wired device to Wi-Fi 6 or 6E via an adapter. In fact, it’s cheaper to get the ARRIS W6U and a Wi-Fi 6E card.

Wi-Fi is always Half-Duplex: Data moves in one direction at a time. You can think of Wi-Fi as the walkie-talkie in voice communication.

Wi-Fi beats wired in terms of convenience and design. Wired beats Wi-Fi in everything else.

But for some reason, if you insist on spending over $300 to get this rigid way of getting a single wired device connected, the ARRIS W6B Surfboard Thruster will work out well despite the fact it makes no sense, and it doesn’t have to be that way.

Tue Oct 4 , 2022
When configuring a home router, you’ll run into many Wi-Fi settings with cryptic names. Often, you have no idea what they mean, making it hard to determine the correct value to enter. And you’re not alone. I myself have a hard time remembering all those acronyms or keeping tabs on […] 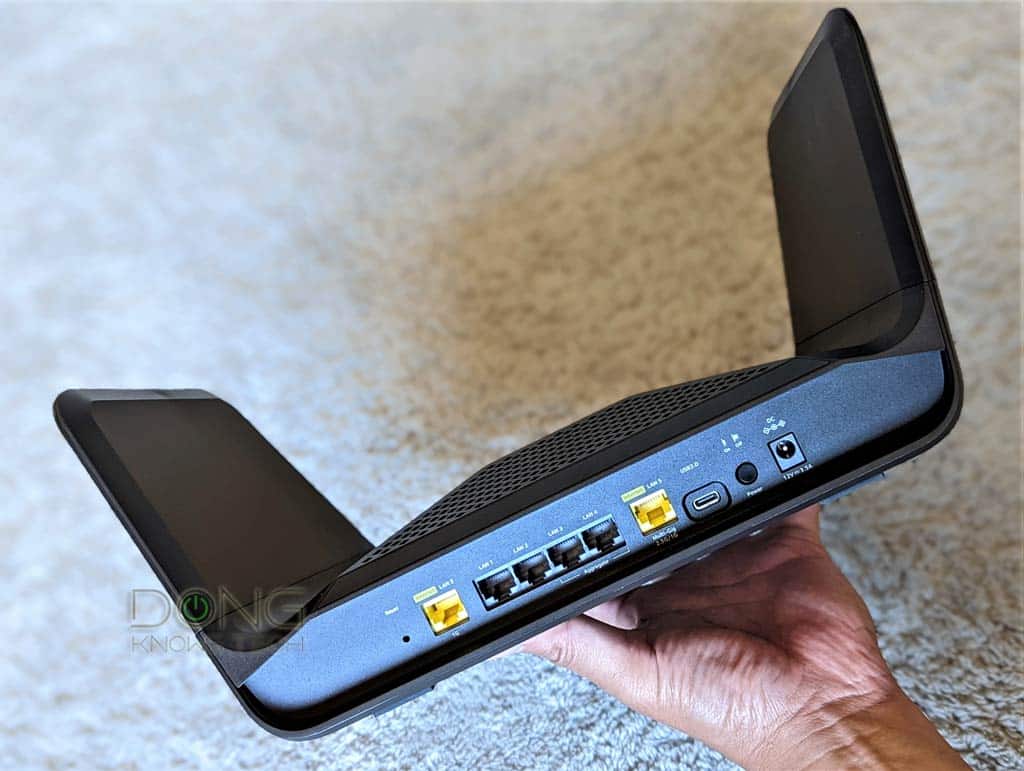