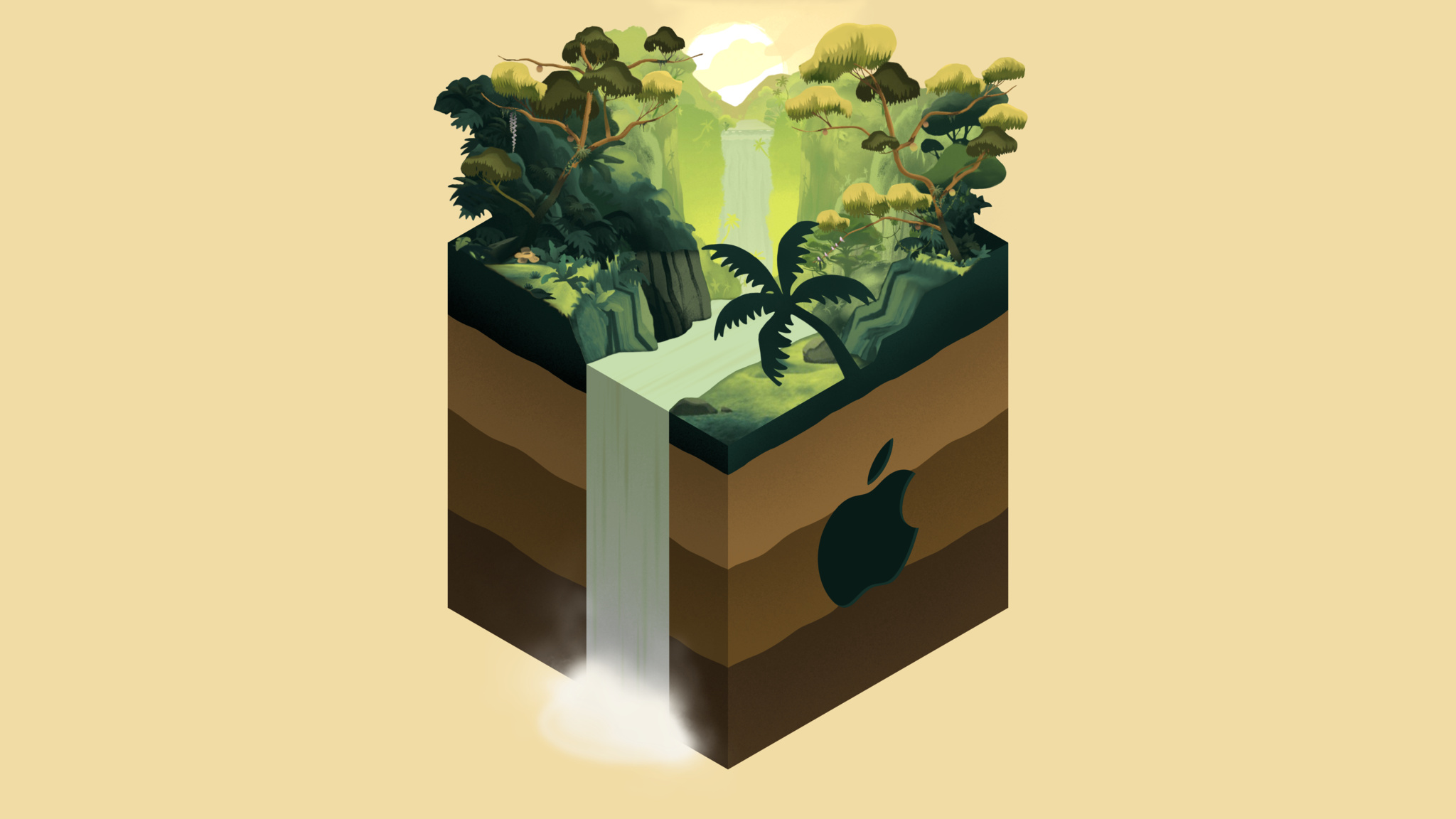 “[They’re] a kind of asynchronous communication,” says the Vienna-based designer. “I can share topics and thoughts with people all over the world. I find that very rewarding — if it turns out well!” he adds with a laugh.

Gibbon: Beyond the Trees turned out pretty well. Developed by Broken Rules, of which Bohatsch is a co-founder, Gibbon casts you as an ape who flings, swings, and slides their way through a beautifully realized landscape. The flinging-around-trees mechanic is unique, but easy to learn — even for earthbound humans. 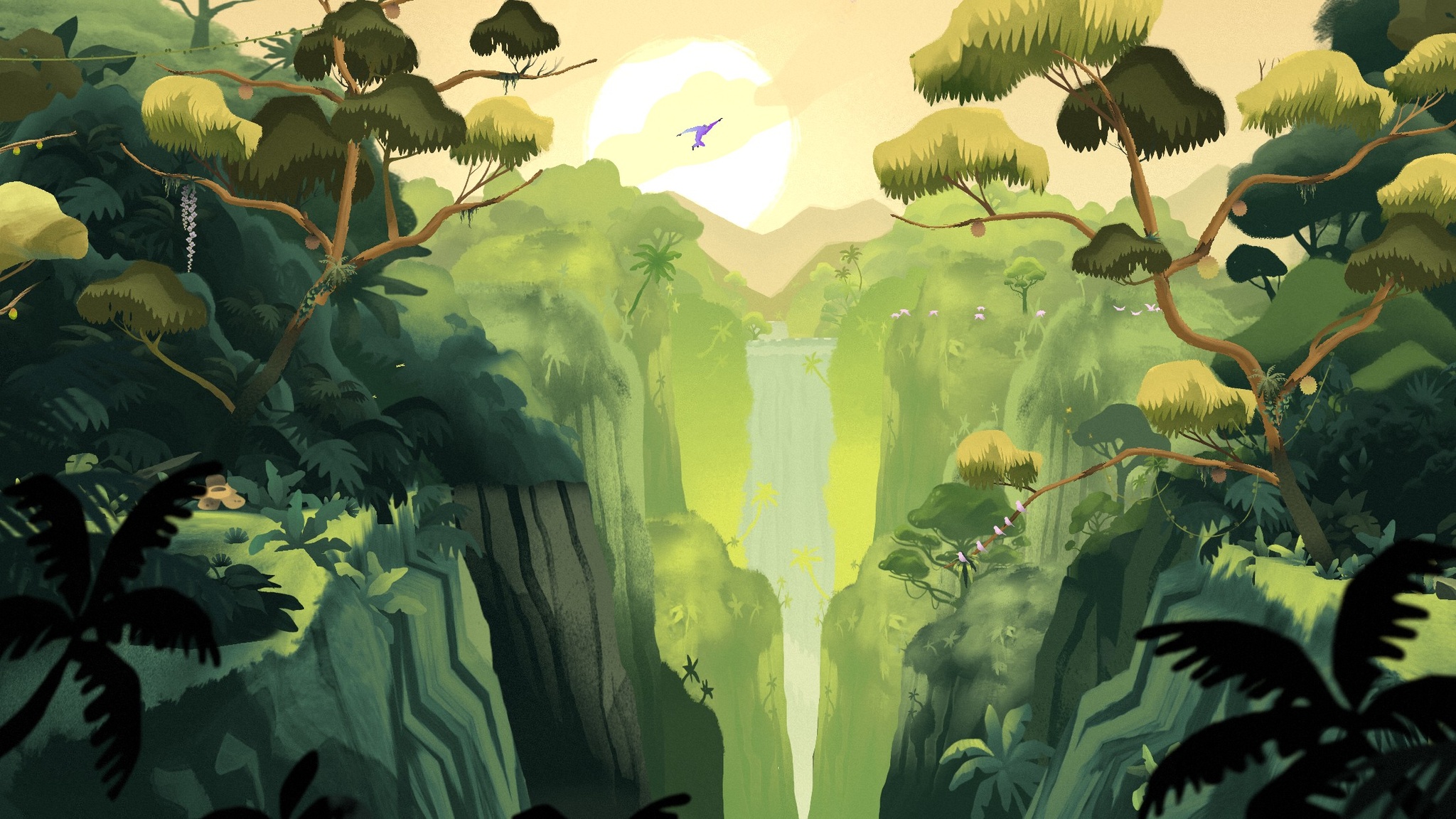 Welcome to the jungle: Gibbon begins in a gorgeously drawn forest.

“The goal was to create a flow state with the gameplay, where players get into the swinging and jumping without thinking too much about it,” says Bohatsch, who conceived the game with Clemens Scott, Broken Rules’s creative director and lead artist. “What we hope is that the device sort of vanishes, and all you have is the players, world and characters.”

Still, there’s more to Gibbon than free-flying fun. “We quickly realized we couldn’t just build this purely escapist infinite runner, where everything’s lush and beautiful and happy,” Bohatsch says. “Gibbons are endangered. They’re losing their habitats and their forests are being destroyed. And that led to my second motivation: To show the world the difficulties gibbons face. Not to be preachy — but to show how it might feel to lose your family, or to live in a world where there’s maybe not much place for you.” 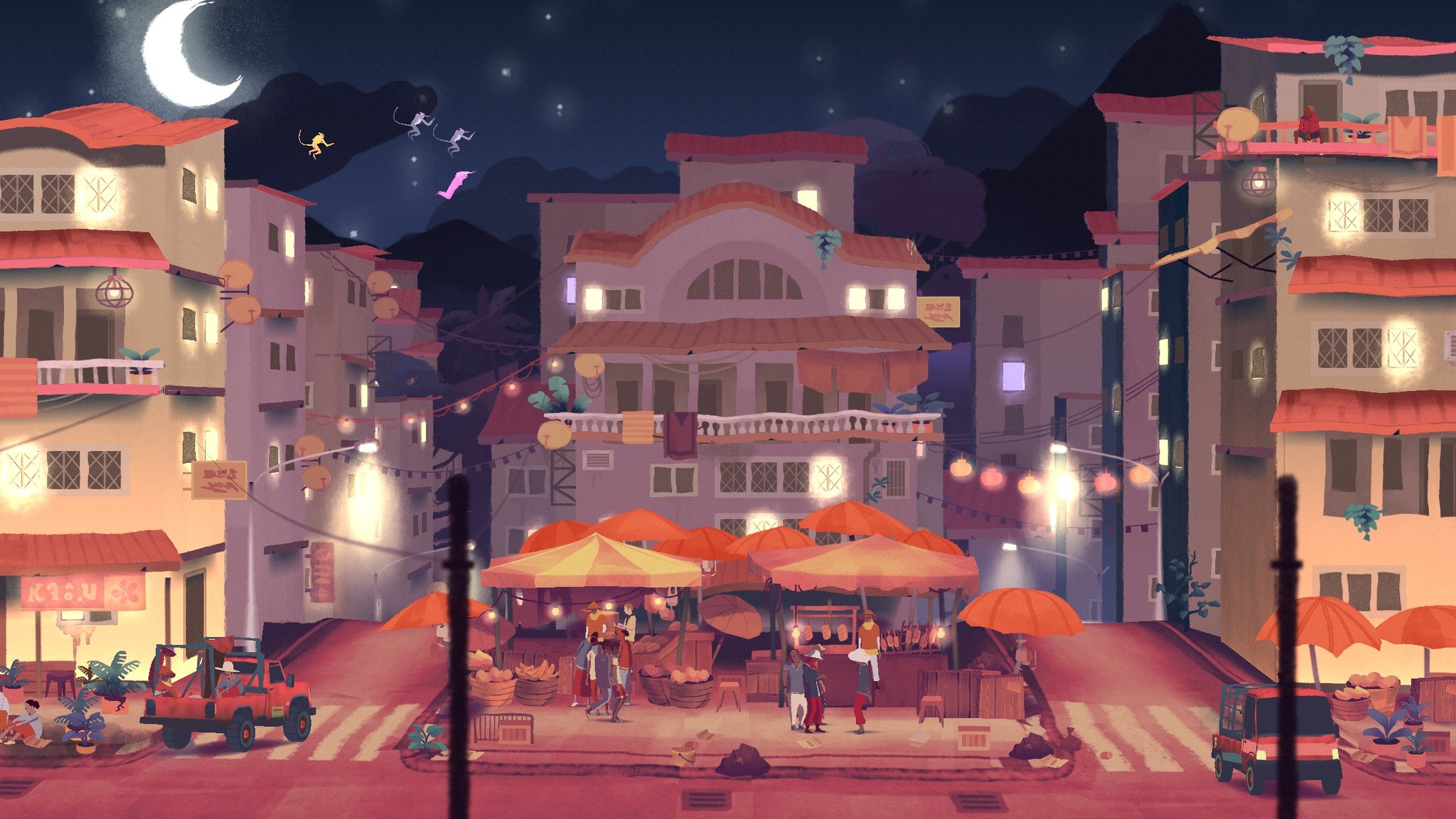 The game’s bustling cityscapes are a commentary on how gibbons are losing their habitats, says Bohatsch.

For a short while, Bohatsch felt that there might not be a place for him in design. He applied to university with the hopes of studying graphic design but wasn’t accepted to the program he was aiming for. “I thought, well, I’ll learn more about computers, since that’s what designers use,” he says.

He spent the next few years learning the tools of the trade and the science behind it. Though he certainly played his share of games, he never considered himself a hardcore gamer. What he did feel was the draw of games — the way they could unify graphic design, interactive design, and computer science.

When an opportunity to study game design materialized, he jumped at the chance. “I’d never seen myself as a game designer, but that moment was where I realized I could combine my passions and put them to good use.”

I wanted to evoke feelings that might be linked to the natural world [without] re-creating it.

Appropriately enough, the idea for Gibbon came from a family trip to the zoo, where Bohatsch found himself noticing the animals’ remarkable agility and almost otherworldly movements.

The Broken Rules team explored variations on that idea over several years as they worked on other projects, trying to find the right translation of that motion to a screen. “We didn’t want a simulation game; we wanted a sense of abstraction,” Bohatsch says. “I wanted to evoke feelings that might be linked to the natural world [without] re-creating it.”

To breathe life into the game’s rich hand-drawn look — the lush forests full of spreading branches, inviting vines, and mighty tree trunks — the team turned to London-based artist and designer Catherine Unger, a game veteran who’d worked on such titles as Tangle Tower.

“The goal was for the visuals to look like an illustration,” says Unger. That meant adding hand-painted 3D textures, rough edges, and even a little wobble in the game’s linework to capture that storybook feeling.

The team initially used 2D assets to create a parallaxing environment with the game, then experimented with turning the canopies themselves into 3D splines. “It looked amazing!” says Unger. “That snowballed into a discussion that led to [more] 3D foreground elements that gave the game a whole new level of depth.”

There was a lot of debate…

When it came time to replicate the animals’ movements in the game, the Broken Rules team, well, broke the rules. 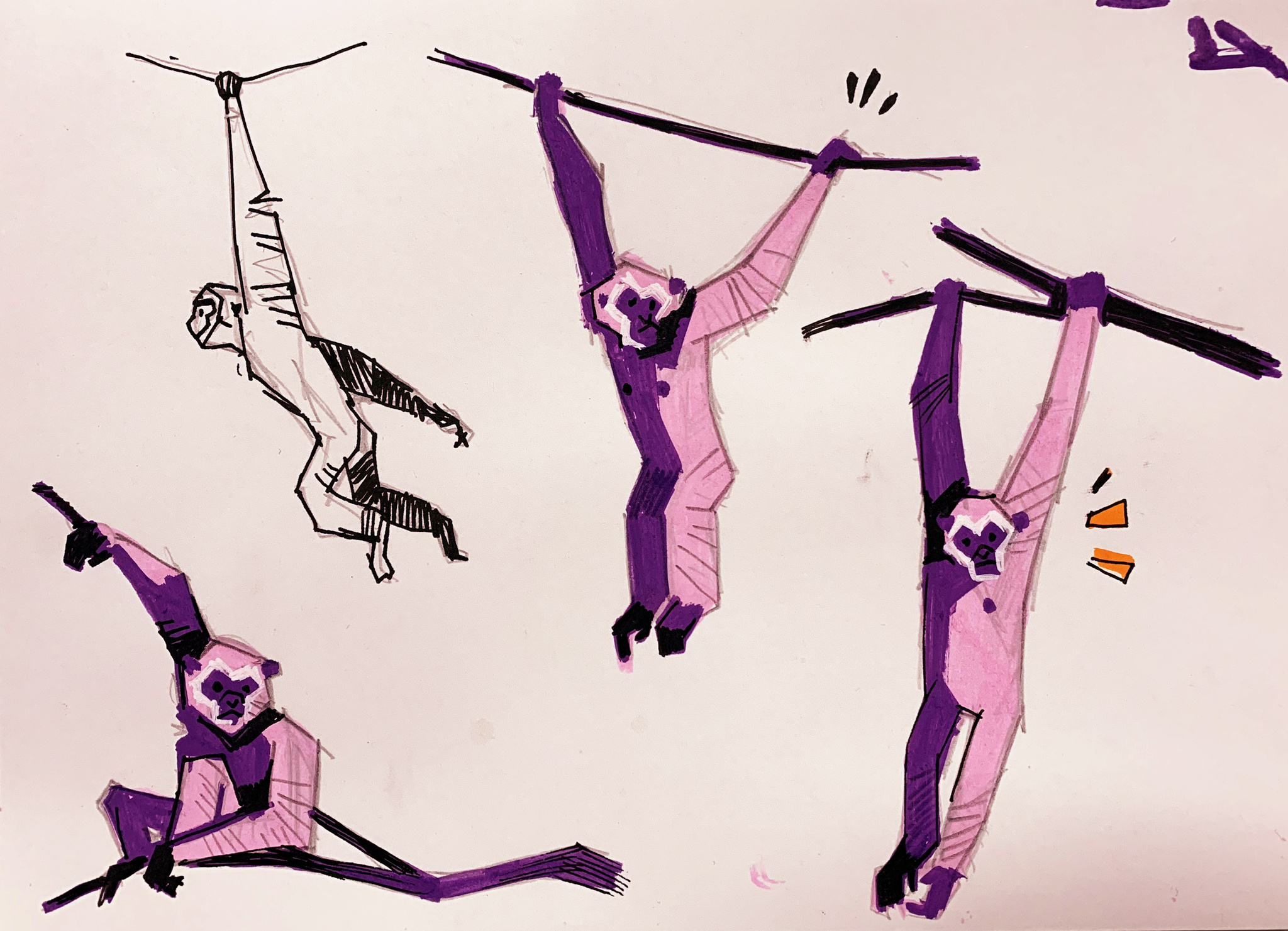 Early sketches show how the Broken Rules team reached for a “poetic connection” between player and character.

To refine the mechanic, Broken Rules brought on Canadian developer Eddy Boxerman to sharpen the game’s main physics and movement. “We never wanted it to be about pixel-perfect timing, but we did want some kind of challenge that gave you agency over your actions.” The team tried out alternate outcomes for not lifting your finger at the right time, including one that levied a penalty and another that… did pretty much nothing. “The gibbon would just jump away on his own. It was easier for some players,” laughs Bohatsch, “but it was getting pretty boring.”

Gibbon‘s jump-to-release mechanic subverts the traditional press-to-jump action of most games, but the Broken Rules team stands by it. “There was a lot of debate about whether this was a good idea,” he says, “but I think it creates a kind of poetic connection between you and the character.”

The mechanic created a challenge for Unger too. “It was particularly difficult to create the art style for the trees; the gameplay meant that the trees looked a bit alien and unusual,” she says. It was game co-creator Scott who solved that challenge, suggesting that Unger and team limit tree canopies to the background branches and keep the main gameplay branches free for gibbon swinging.

The games we want to build aren’t necessarily about being realistic, but about developing emotions.

The poetic connection Bohatsch mentions is the keystone of the game — and it’s been Broken Rules’s specialty since the studio’s 2009 inception. The Broken Rules catalog includes such well-regarded titles as And Yet It Moves and Secrets of Raetikon, as well as two more Apple Design Award winners: Eloh, a rhythmic puzzle game, and Old Man’s Journey, whose main character follows his own arc of loss, regret, and reconciliation.

“It’s really about emotion, right?” he says. “The games we want to build aren’t necessarily about being realistic, but about developing emotions. When I was younger I played a game called Ico, and there was a moment when you held a button to grab hands with a secondary character. It felt so great. All you did was press a button. But the characters and their reactions were so natural and evocative. That showed me how games can create a whole range of different emotions.” 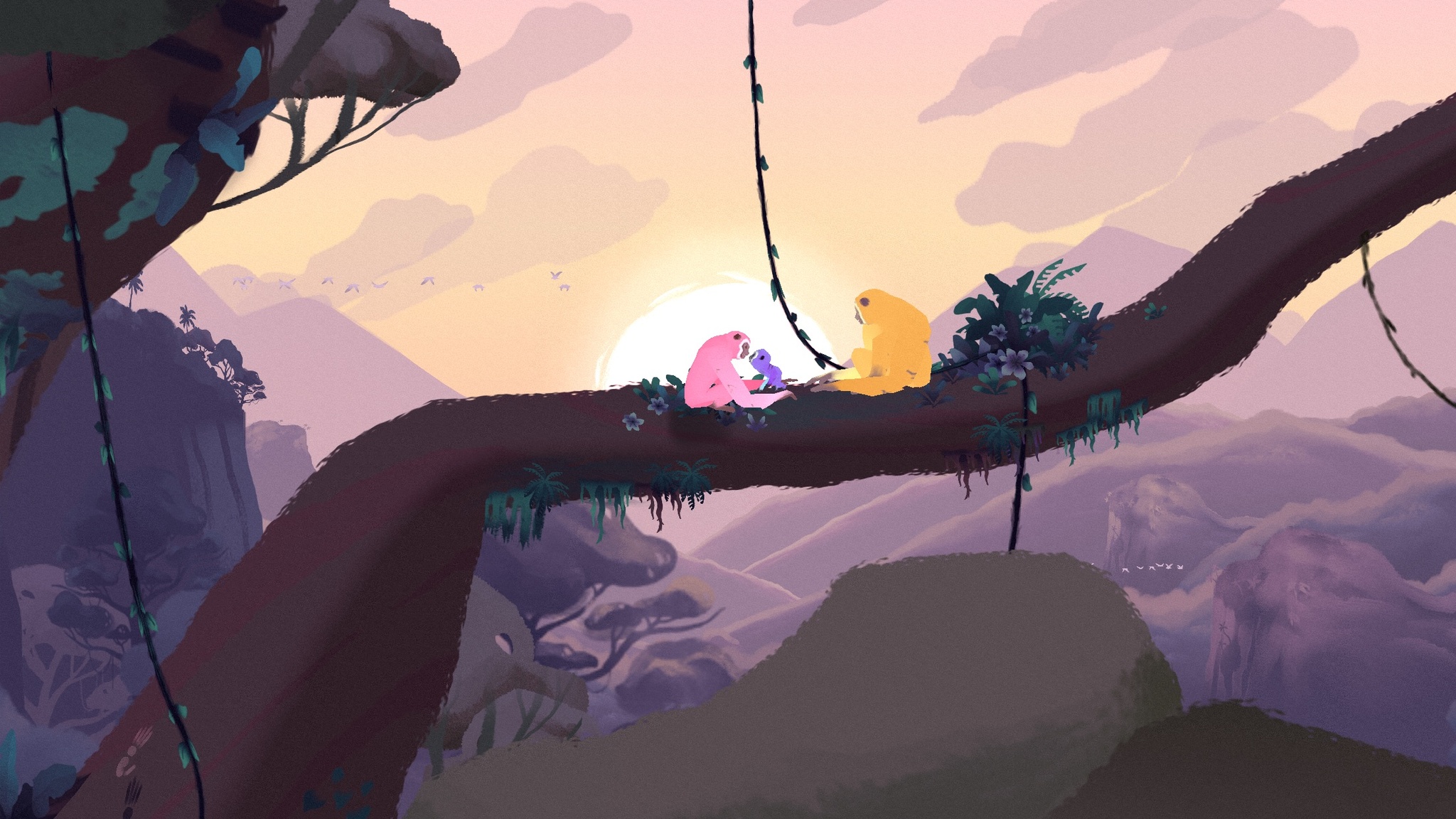 In the end, Gibbon is about a search for family.

Emotion isn’t the only thing at play in Gibbon — the team has a careful eye on embodiment, too. “Players tend to have a bias toward the characters we play,” says Bohatsch. “In Old Man’s Journey, we heard from players about how, as they played, the developed more empathy for the old man.” It’s the same with Gibbon — putting yourself in the hands of another creature creates that connection from the first jump.

This immersion carries through in the game’s environments. When play begins, you’re in a lush forest: swinging amongst spreading branches, inviting vines, and mighty tree trunks. As the game continues, however, those forests begin to thin out. The primal green backdrop so familiar to those early moments is replaced by harsh, chugging construction vehicles and the dissonant rumble of man-made machinery.

“I wanted the deforestation scenes to feel starkly different from the jungle scenes, not just for visual variety but also for emotional impact,” says Unger. “The more realistic desaturated tones in the deforested areas mirror the empty feelings of the gibbons in the game. But they’re also a true-to-life representation of a jungle devastated by human impact.” 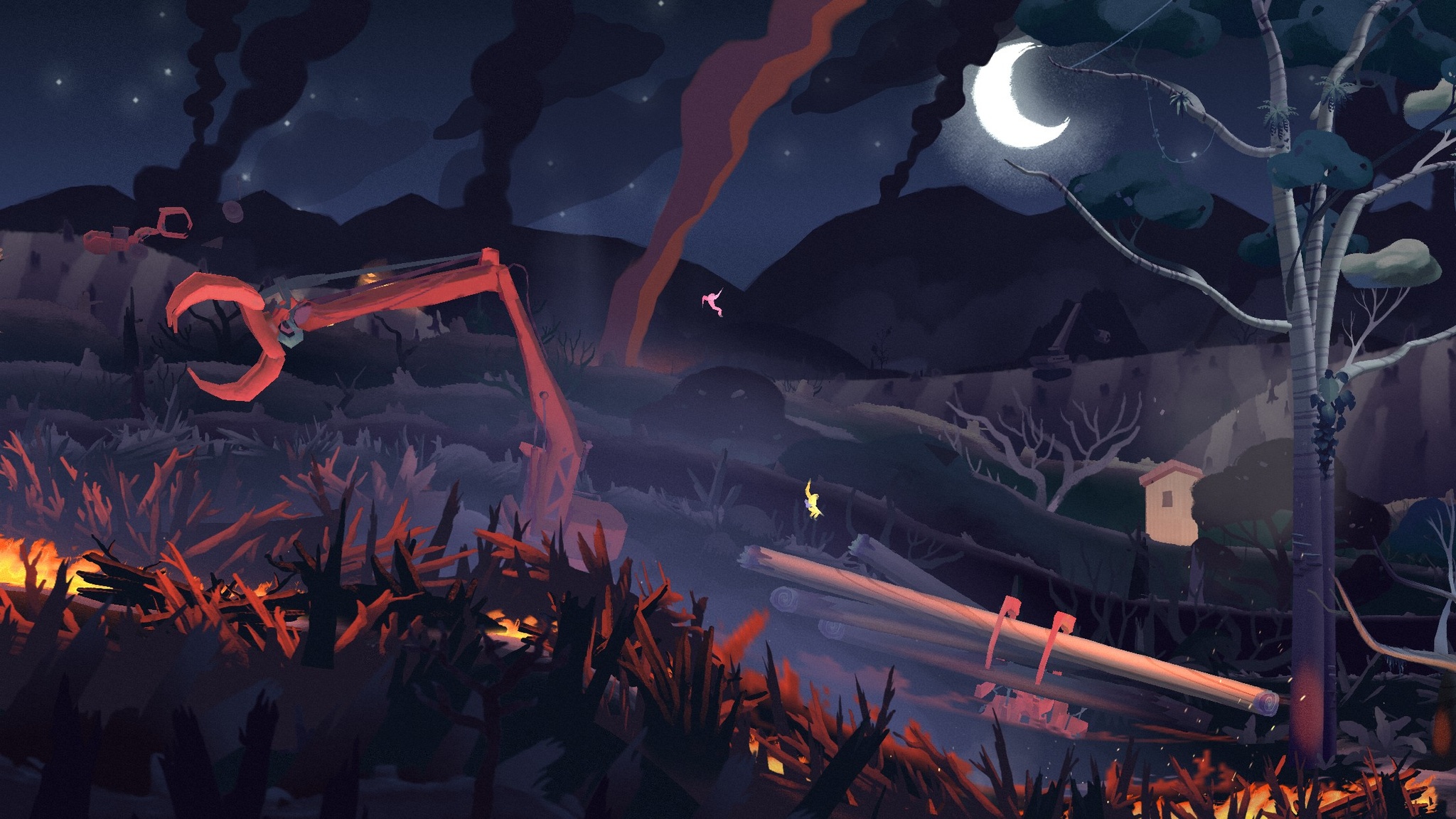 The game’s deforestation scenes have a dark, unsettling feel — especially when contrasted with the natural beauty of previous levels.

In the end, Gibbon takes its place among Broken Rules’s titles as a game that’s something more. “I want people to think about gibbons and about how much space we can still give them,” he says. “We want to linger in people’s minds after they’ve played.”

And he wants to continue creating games that speak to something bigger, something more universal, something that can’t be created in a vacuum — or, sometimes, even a studio.

“If I had any advice for aspiring designer, it would be to go out in the world and live a life outside of games,” he says. “Travel, talk to lots of people, read books, go to concerts. Play games, sure, but don’t spend all your time with them. There’s so much inspiration in the world, whether it’s coming from nature or other human beings or other species. That’s what we’re trying to design: new ways to look at the world through the gaming lens.”

Learn more about Gibbon: Beyond the Trees

Download Gibbon: Beyond the Trees from the App Store

Behind the Design WWDC22 - Discover

Wed Jun 29 , 2022
The Apple Design Awards honors excellence in innovation, ingenuity, and technological accomplishment in application and activity layout. Our award-profitable designers get thoughtful and artistic approaches to their applications and online games, offering people new strategies to operate, perform, or visualize issues that had been under no circumstances ahead of possible. […] 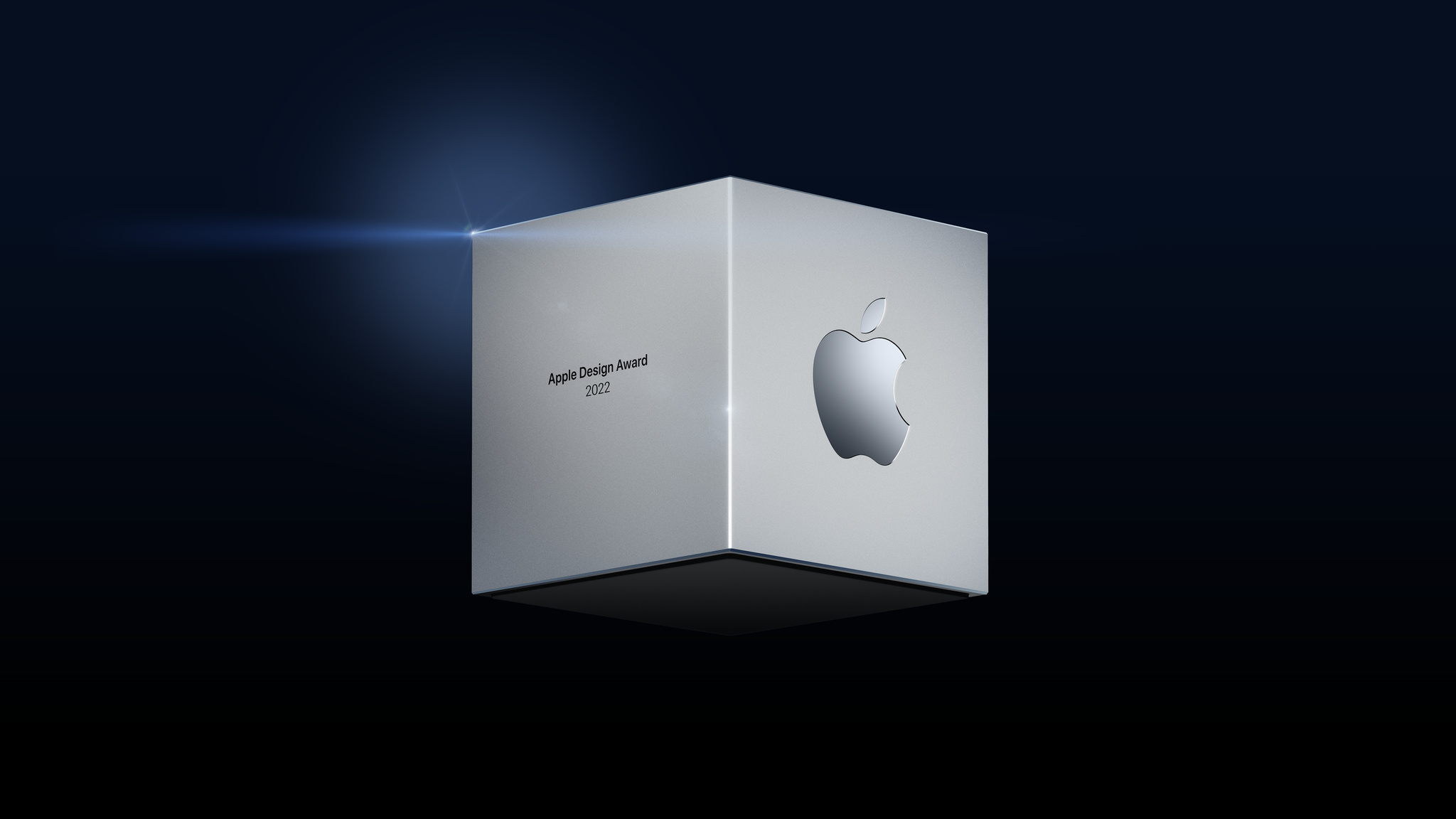